I always make these cinnamon rolls for Easter and Christmas and then randomly when I get a craving for warm, yeasty, cinnamon-y,  rolls dripping with melted butter.  These are my idea of comfort food. So I knew what I would make for a dear friend and neighbor who just got home from heart surgery (it doesn’t use that much butter & he claims that the doctor said he has no dietary restrictions…so, no, I’m not trying to kill him).  Tom may have some mechanical problems with his ticker but if ever there was a person with a ‘good’ heart, it’s Tom.  We’ve been friends and neighbors for 20 years now and there’s never been a time when I needed help that Tom wasn’t there. There was the early evening during a blizzard when I looked out my window because I heard a snowblower in my driveway.  Yup, it was Tom starting to clear the 3 feet of snow that had already accumulated so that my husband could get into the driveway when he came home from work.  Then one summer I asked for advice on the basics of building a tree house with my daughter.  We were thinking a floor and a few boards nailed on the sides but I didn’t know how to make the sides.  We had something like this in mind: 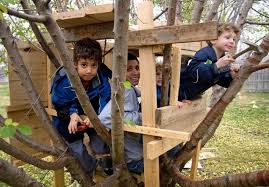 Next day, Tom’s construction crew was in my woods and they came up with this…

And I’ll never forget the day that a huge tree fell on our house, crushing the screened back porch and punching a hole in the main roof of the house.  Tom happened to be driving by when he noticed the commotion and within a couple of hours he was on our roof putting a temporary patch on.  I could go on but I think you get the idea of what kind of guy Tom is and I have to ask you – do you think there’s anything wrong with his heart?

You do need a little time to make these rolls since it requires two risings but the process isn’t difficult but oh, they are worth it.

*  Heat milk in small saucepan until bubbles form on edge; set aside
then add sugar, salt & butter to the milk, stir until butter melts. Let cool to lukewarm
*  In large bowl (you will mix all ingredients in this) pour yeast over 1/4 cup warm water.  Let yeast sit for a few minutes then stir until
dissolved & all lumps are gone.  Add milk mixture.

*  Add egg and 1 1/2 cups flour, stirring with wooden spoon until
smooth and dough leaves side of bowl. At this point I use the mixer
with dough hooks as I add 1/2 cup of flour, then final 1/4 cup flour.

*  Knead dough w/mixer or by hand until it has a satin appearance
and an elastic feel. Remove from mixer & knead it a little more by hand

*  In large greased bowl, slam dough ball into bowl, then pick up &
slam it down on the other side (kids love doing this). Cover with a
cloth & let rise in a slightly warmed oven until about double in size
(usually about 1 – 2 hrs).

*  Punch dough down (another good job for kids) then knead for about 10 minutes on lightly floured board.  Roll out in a large rectangle (about 12×8″), then follow directions for the cinnamon filling.

After dough has risen, roll into rectangle then spread softened butter

1.  Combine sugars and cinnamon with a fork.
2.  Spread softened butter onto sweet dough then sprinkle sugar mixture all over.
3.  Roll dough tightly, pinching edges.  With seam side down, use a serrated knife to slice into about 10 sections.  Place each roll into a greased muffin cups & pull center up slightly.

4.  Return muffin pan to a slightly warmed oven until rolls rise.  Remove from oven, preheat to 350°, return rolls for about 14 minutes (yes, 14 is how I like them because they come out not doughy but just slightly cooked & soft).

I know some people like these with a little bit of glaze or icing, but I’m a purist and prefer slicing them in half with a pat of butter on each side fresh out of the oven. If microwaving later, I cut in half with butter and warm for 20 seconds.

40 thoughts on “Cinnamon Rolls for special friends or occasions”