No, it’s not a new Stephen King book and it’s not a horror movie but it should be and it could be filmed in my house.  Do any of you have a problem with stink bugs?  For the past few years, this area has been invaded by what I now know to be …ready for this – the Brown Marmorated Stink Bug and he looks like this: 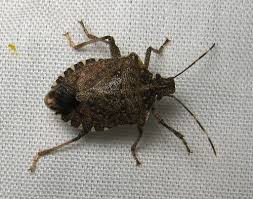 Now I’ve been doing some research about how to get rid of them and there doesn’t seem to be an easy solution.  For some reason I started doing searches and typed in “prehistoric looking bugs” – guess what I found?  Yeah, STINK BUGS!

It seems there’s no living creature that will eat these things.  When it starts to get cold, they look for a nice warm place for the winter so they cover the screens with the intent of moving into my bedroom.  During the day I walk around with my spray bottle of Windex squirting them like the father spritzing everybody in My Big Fat Greek Wedding.  I don’t know that it kills them, but it gets them off the screens and makes me happy.  At night though, I go on a search and destroy mission with my box of Kleenex trying to get all of the creeps hanging out on the backs of my drapes and shades.  Problem is, even if you’re careful not to squish them, they know you’re coming and spray, leaving a stink bug stink hovering in the air for a while even after they’ve been flushed.  Maybe I have a vivid imagination, but I’m picturing all these thousands of stink bugs in my septic tank, growing, multiplying until one day they blow the lid off the tank and come crawling out.  I’ve thought of using the vacuum cleaner but I couldn’t sleep at night knowing they’re sitting in there waiting for me to go to sleep before creeping down the hose to get me.

And don’t tell me to sic Moe on them – they horrify him!  It never fails that after my stink bug reconnaissance, just as I get settled in bed and start reading I hear that bzzzzzt.  Moe goes shooting off the bed, but he’s not stupid.  He’ll point them out to me but stay at least a foot away while I get them.  So if any of you have these nasty things and have some clever solution to getting rid of them, please let me know.  If not, thanks for letting me vent.  I feel better already and it’s Friday, so enjoy a Moe-Ment of Zen (turn up the volume)…