My last post may have mentioned that we’ve been getting hammered this winter with blizzard after blizzard after blizzard – each dropping at least a foot of snow on us, followed by freeze your eyeballs solid cold.  Although I was born and raised in New England and I don’t think that I could ever live where there aren’t 4 seasons, I think we’ve had enough of the particular ‘season’.  With storms hitting us every other day it’s been hard to get out because the back roads are narrowed down to one lane.  I guess the best way to tell you about our winter is with pictures:

The day before this stop sign was completely buried – apparently the town went around clearing stop signs.

You should have heard the noise when my husband got up on the ladder to knock these icicles down! 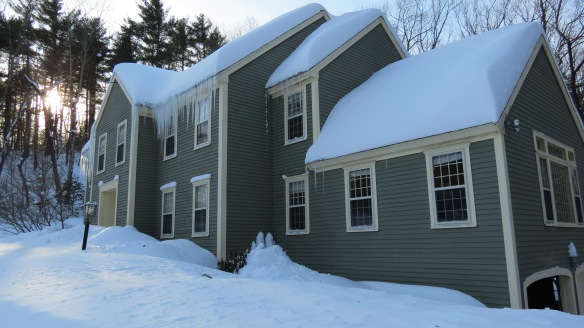 I’m guessing when this bird gets back from Florida, she’ll be putting in an insurance claim for damages for her roof leaking… 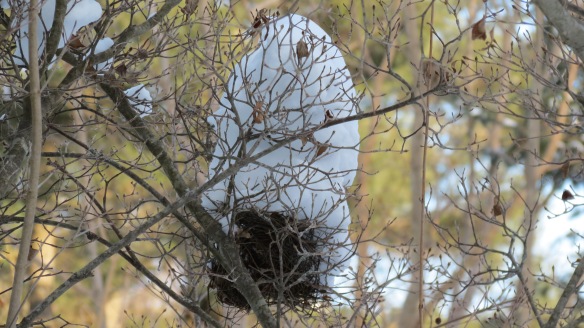 My three meal choices for this delivery were Orange Beef Lo Mein, Shrimp Po’ Boys, and Chicken & Sage Biscuit Pot Pie.  I started with the Lo Mein which is something that I never would have tried on my own since I would have no idea what half the ingredients were.  However, they include very detailed instructions – some would say foolproof but I proved them wrong.

The result was really good although I made the mistake of forgetting to add the spice blend while cooking the meat so it didn’t really absorb and made for a very strong flavor.  I think I did a pretty good job of recreating this dish to look like their example.

Now, for the next meal we decided to try the Shrimp Po’ Boys which is where I really blew the instructions.  They gave us butter lettuce – some to put in the sandwich rolls and the rest for a salad with vinaigrette dressing.  There was a package for the remoulade sauce to top the shrimp in the Po’ Boys and a package for the vinaigrette dressing for the salad.  The instructions CLEARLY showed two bowls – one for the remoulade and another for the vinaigrette.  Back to that brain freeze I’ve had this winter…I dumped all of the ingredients together so we had a very um, tangy remoulade sauce.  Surprisingly it was still very good but I may have growled at my husband when he started laughing and said “huh, wonder what this was supposed to taste like”.

So tonight I’ll be making the Chicken and Sage Biscuit Pot Pie and I’m going to concentrate and really pay attention to the instructions – this one I’m going to get right.  But, if The Blue Apron is looking for anyone to test out their instructions they can give me a call to check for fool-proof-ness.

40 thoughts on “Winter Blues and The Blue Apron”