Today’s post was going to announce the All Time Best Recipe of the Year (and I will post that in just a minute) but first I have to rant about a sleepless night.  I spent most of yesterday priming the pantry so was looking forward to reading in bed before crashing for the night.

About 8:00pm I thought the wind had picked up when I heard this scratching noise at the front corner of the bedroom.  There’s a tree there and although it’s been trimmed, it still is a little close to the window.  But then that scratching turned into very creepy scritch scratching moving along the entire wall and into the corner.  That definitely brought a “whuu?” from me but no immediate cause for alarm since I was thinking Moe, our terrorist cat was messing around on his scratching post in the corner.  Then that scritching noise moved around the corner, down the wall, directly behind the headboard and it did not sound like the cat at all but something about the same size. When Moe trotted into the bedroom though that definitely changed the “whuu?” to a “WTF?”  and me evacuating the room, racing downstairs to get John up there to take care of the situation.

So John was on the phone chatting with Niki when I quickly gave the update… “wild animal, in the bedroom, hurry up!”

A word about division of labor… we all know there’s division of labor in any home.  John does outside stuff, I do inside stuff.  Electricity, plumbing, yes that’s inside but I don’t mess with that especially if it involves clogs in bathroom pipes.  Examples: 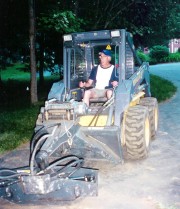 Guy stuff-not really, he was just messin' with someone else's machine

So there’s overlap, but for the most part that’s the way it works unless there’s something inside that belongs outside.

Bugs (unless it’s spiders over 4″ with big hairy legs) I’ll take care of.  We live in the country so mice, that’s Moe’s job when he’s awake (he’s afraid of bugs though, especially stink bugs so he doesn’t do bugs).

Moe on the job - sort of

People inside the house, Lola’s job, either scare them away or smack & slobber them if she likes them.

But critters bigger than a mouse is a husband’s responsibility and when they’re in the bedroom at night I want action.

I understand the Beanpot is important, I get that.  I love talking to Niki too, but really unless her car died (even that’s iffy depending on where the car died) that’s a call-back situation.  An unidentified wild animal demands jumping up and responding.  I want to hear weapons, I want to hear boots pounding up the stairs and whatever’s behind the bed, I want GONE!  What I don’t want is meandering upstairs with a flashlight and whisk brush and dustpan.  The dustpan can come later.  It’s not as though we haven’t practiced this before.  We had the flying squirrel incident in Niki’s bedroom that lasted 3 hours with lots of swearing, grumbling about too much crap under Niki’s bed, chairs getting knocked over, and a really scared squirrel racing from bed to dresser, to bookcase until he got cornered in a box and tossed out the second floor window.  So it’s not as if we haven’t had this drill before.

John eventually wandered upstairs obviously assuming an overreaction on my part.  But since Moe was standing on the bed peering over the headboard on full alert I think we had a confirmed critter violation.  It obviously didn’t involve a human since Lola was sleeping and only woke up to see what the excitement was about before going back to sleep.  Of course by this time, there really wasn’t much to see although John did use the flashlight to check under the bed and yes, gripe about too much crap under that bed (the area under beds is a natural extra storage space and I was in no mood to get into that discussion)!

Although I could possibly be convinced that whatever was creeping around could have been inside the walls, Moe was still pacing along the mattress which made me think that it could still be under the bed and was more than a mouse.  A mouse, Moe would have been under the bed, anything bigger he wasn’t going to take any chances.  Moe acts like a tough guy until he comes whisker to whisker with anything he can’t identify.  Can’t say that I blame him.  He’s been an indoor cat for most of his life after being picked up in a field as a stray.  He’s a 2 yr. old neutered male who recently had a traumatic surgery for urinary blockages called perineal urethrostomy.

I won’t go into what that is (you can look it up yourself) except to say that when you tell guys about it they clutch themselves, double over & say “oh. my. gawd!”  So I can’t blame him for being a little skittish about the unknown.

Since we never did find whatever it was and John’s solution was to leave the flashlight beside the bed – in case I heard it again while he went back to watch the Beanpot, I decided to grab my book and head down the hall to sleep in Niki’s bed.  Great, comfy bed which I’m still puzzling over why she has the best mattress in the house, but sleeping in a different bed in a different room knowing that there’s something with sharp claws wandering around out there, doesn’t make for a great night’s sleep.  So, groggy and fuzzy brained, I’m not sure that I’ll paint today but I will update and post the WINNER OF THE RECIPE OF THE YEAR … see you next post!