It’s been quite a while since my last post.  And yes, I have plenty of excuses.  Have you ever noticed how one simple project leads to at least 6 other projects?  And how that “to-do” list with 3 things keeps growing instead of getting smaller?

This is the story of my kitchen.  As I’ve mentioned in “Why is Diane writing about recipes?” I did not put much energy into kitchen design when we built our house 20 years ago.  Not that it’s bad.  There’s plenty of honey oak cabinets which I’m just tired of.  I especially would like to do something with this center island: 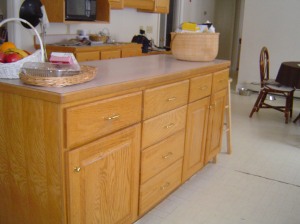 I love the amount of cabinet space but I have to admit that most of the “stuff” in there hasn’t been used in about 20 years.  There’s some things that I’m not even sure what their purpose is, so they could probably be gifted to Niki – see if she can figure out what to do with it.  At each end are electrical outlets.  Very handy not just for the food processor but also to plug in the vacuum.  What I don’t like about this island is that it’s just a big old square box that’s not very interesting and you can’t sit at it while you’re working there.  I have a couple of stools but you have to twist & put your legs sideways which isn’t all that comfortable.  If I just extend the counter top it won’t leave much room for walking around, opening the fridge or dishwasher.  And of course it’s not very inviting for people to sit and chat or (help out) while I’m working there.

But the biggest mistake I made when we built was trying to hit one of the builder’s allowances which led to putting a vinyl floor in the kitchen.  Within one week, I moved the refrigerator and ripped up the vinyl in front. After 20 years, seams have pulled apart and edges have curled.

Then along came Lola.  Lola is the third Berner we’ve had so it’s not as though I was clueless about the things that Berners find interesting, funny, or edible.  But Lola was definitely the biggest chewer of the Berners we’ve owned. As a puppy she was a non-stop chewer, a world-class chewer. 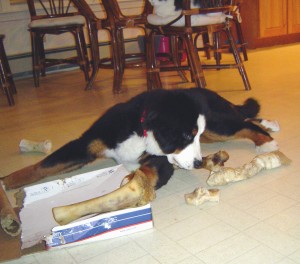 Unfortunately for me her favorite chew toys were my body parts.  While she was being housebroken (or the house was being broken) she was confined to the kitchen with baby gates.  I left her napping one day in the kitchen and returned to find this:

and this… notice how refreshed she is after her nap:

Lola after her snack

Even with this latest mishap, my husband was reluctant to go ahead and replace the floor.  I knew I wanted tile but for some reason John thought that Lola would be able to eat that too.  Finally, finally we’ve agreed that this floor has got to go and we picked out a tile.

Of course I was thinking that it would be better to paint the walls before the new tiles went down.  Unfortunately a couple walls had mauve wallpaper (I know, but remember this was built in the early 90’s).  And who would have thought that the wallpaper wasn’t the kind that just peels off in big strips!  Weeks later I was still picking off little 3″ strips of paper but finally got to the original idea of actually painting.

Painting kitchens has to be about the worse painting project in the world because of cabinets and appliances.  Plus the floor and walls include a hallway to the office, another to the back hallway which leads to the downstairs bath, plus a 7’x7′ pantry (they all have the same floor as the kitchen and will be included in the tiling project).  And if you paint the walls, of course you have to paint the trim and the windows, and the doors… see how a simple project gets away from you?

After getting part of the kitchen painted I realized how close to Christmas it was so I picked a point where cabinets sort of hid the fact that the room was two toned.  In addition to Christmas, Niki’s birthday, and New Year’s,  I also got around to getting my dental implant started.  The dental implant being necessary due to that very same Bernese Mountain dog jumping up to give me a kiss as I was bending down to pat her.  Getting smacked in the jaw by a Berner head is a lot like getting hit with a bowling ball. This Berner kiss ending up with my tooth cracking off at the gum line. Lola’s teeth were fine though in case you were worried.

Any oral surgeon will tell you that getting an implant is “not that bad” but of course the surgeon’s on the wrong end of the scalpel to make that determination.  I figured having my mouth drilled and the jaw opened up with, I think, a can opener, deserved a little break and so I’ve just now gotten back to picking up where I left off with that painting project.

And did I mention that part of the project includes a bathroom/laundry room that has a washer & dryer?  And of course once you move the dryer, you realize how much lint can collect in the vent which leads to the next project of cleaning & replacing the dryer duct (but that’s John part of the project I’m happy to say).

At least a good part of this project is done or at least the parts company might easily see if they aren’t too nosey.  Pantry, doors, windows all have to be painted but I do feel like I’ve made some progress. So this mauve Monet-ish wallpaper over Niki’s left shoulder: 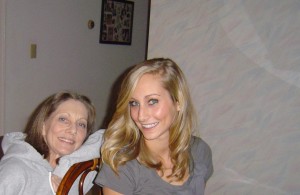 has been replaced with “light rafia” – okay, it’s really off- white with a hint of cocoa.

The big decision though will be that center island. The kitchen is long, the island is in the middle & although I have a good size seating area I think I’d like something that is a coordinating color rather than matching, something more open & with some seating.  It has to be decided before the tile however because if I decide on a large work table to open the room up, obviously the floor has to be tiled underneath.  Because of the electrical outlets at each end, wiring needs to be modified if I go with something like this with maybe a longer table length:

So I think the kitchen re-do is progressing but there’s going to be a lot of negotiating going on before it’s done since John kinda likes that old island.  But if I’m going to be writing about recipes, I absolutely have to update the kitchen – right?  Good, I’m glad we’ve all agreed to that!